Lawyer accuses Justice Thomas of groping her at a party in 1999; he calls the claim 'preposterous' 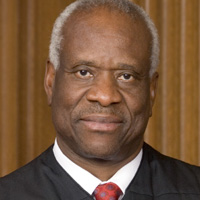 The vice president and general counsel of a natural gas company in Alaska is going public with an accusation that Justice Clarence Thomas groped her at a dinner party in 1999.

Moira Smith tells the National Law Journal (sub. req.) that she was a 23-year-old Georgetown University graduate and a resident scholar for the Truman Foundation when the incident occurred. She first went public with her claim on Facebook after release of the video that captured Donald Trump bragging about groping and kissing women.

Thomas denied the accusation in a statement issued to the National Law Journal. “This claim is preposterous and it never happened,” he said.

A spokeswoman for Smith confirmed to the Washington Post that the National Law Journal story was accurate and said Smith will soon be releasing a statement.

Smith’s job with the Truman Foundation had included coordinating the scholarship group’s summer institute and supporting its executive secretary, Louis Blair, who hosted the June 1999 dinner party. Thomas was there to present a foundation award to a Kansas state lawmaker.

Smith tells the NLJ she was setting the place to the right of Thomas when the justice “reached out, sort of cupped his hand around my butt and pulled me pretty close to him.”

“He said, ‘Where are you sitting?’ and gave me a squeeze. I said, ‘I’m sitting down at the garden table.’ He said, ‘I think you should sit next to me,’ giving me squeezes. I said, ‘Well, Mr. Blair is pretty particular about his seating chart.’ I tried to use the seating chart as a pretext for refusing. He one more time squeezed my butt and he said, ‘Are you sure?’ I said yes, and that was the end of it.” She then went to the garden table and sat down.

Thomas’ actions felt “somewhat menacing and I felt vulnerable,” Smith said, yet she still felt conflicted about the incident. “On the one hand, I really liked Justice Thomas,” she told the NLJ. “He was clearly smart, engaging, and hilarious—he had a booming and totally infectious laugh. On the other hand, I was so confused about what had happened. It had transgressed such a line.”

Smith posed for a photo with Thomas after the dinner.

Blair told the NLJ he was never told of the accusation, and he questioned whether Thomas would have been alone with any of the dinner guests.

The Washington Post spoke with Mark Paoletta, a former assistant White House counsel who worked on Thomas’ confirmation, for reaction to the NLJ article. “Justice Thomas has hired more than 30 women law clerks over the years, has worked closely with them day in and day out, and none of them has ever accused him of any inappropriate conduct. In fact, they hold him in the highest regard,” Paoletta said. “I do not consider it a coincidence that this Democratic smear on Justice Thomas comes as he celebrates 25 years on the court, and in the heat of a presidential election.”

Smith is vice president and general counsel of Enstar Natural Gas Co. Her current husband, Jake Metcalfe, is a former chairman of the Alaska Democratic Party. Metcalfe withdrew from a race for the U.S. House amid reports linking his campaign to fake websites that disparaged a rival; he told the Alaska Dispatch News at the time that a campaign worker was responsible.

She added that “silence no longer feels defensible; it feels complicit.”

Updated at 2:40 p.m. to include statement by Mark Paoletta to the Washington Post.