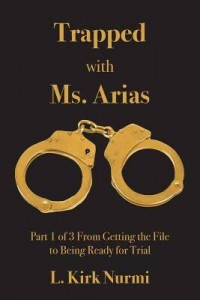 An Arizona criminal defense lawyer has agreed to a four-year suspension for publishing a book about the trial of his high-profile client, Jodi Arias.

The consent agreement by Laurence “Kirk” Nurmi still must be approved by the Arizona disciplinary judge, the Arizona Republic reports.

The agreement alleges that Nurmi violated lawyer ethics rules by revealing client conversations and evidence found to be inadmissible, according to the story. His self-published book was called Trapped with Ms. Arias.

Arias was sentenced in April 2015 to life in prison for the murder of her boyfriend. Arias had claimed she shot and stabbed her boyfriend in self-defense, while prosecutors maintained she killed in a jealous rage. The case is being appealed.

Deputy Maricopa County Attorney Juan Martinez also wrote a book about the case, which was published earlier this year. It was called Conviction: The Untold Story of Putting Jodi Arias Behind Bars. The Attorney Discipline Probable Cause Committee of the Arizona Supreme Court has not acted on complaints filed against Martinez in connection with the book, according to the Arizona Republic.