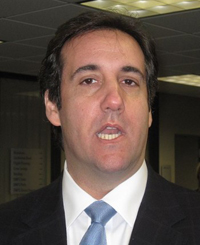 Cohen told the Wall Street Journal (sub. req.) that in the last discussion, in January 2016, he told Trump that he had killed the deal. The first discussion was to inform Trump he was working on a licensing deal for the tower, and the second was to get Trump’s signature on a non-binding letter of intent for the project.

Cohen says he never informed Trump about a January 2016 email he sent to the top press official for Vladimir Putin, which reportedly asked for assistance in getting the “stalled” deal back on track. The Washington Post reported on the email, and the Wall Street Journal got confirmation from a person familiar with the email exchange.

Cohen told the Wall Street Journal he didn’t recall receiving a response from the official, Dmitry Peskov, before he gave up pursuit of the project.

Cohen said in a statement to the House Intelligence Committee that he emailed Peskov based on a suggestion by Felix Sater, an unpaid consultant to the Trump Organization who wanted the project to go forward.

According to the New York Times, Sater wrote a November 2015 email about the possible project to Cohen in which he said, “Our boy can become president of the USA and we can engineer it. I will get all of Putin’s team to buy in on this, I will manage this process.” That email has been turned over to the House Intelligence Committee, along with Cohen’s email to Peskov.

Cohen said in a statement to Congress that Sater “has sometimes used colorful language and has been prone to ‘salesmanship.’” In the past, the Trump Organization paid Sater to deliver real estate deals, according to the Times.

Cohen was executive vice president of the Trump Organization. He resigned before Trump’s inauguration and is now one of the president’s personal lawyers, according to the Washington Post.

White House special counsel Ty Cobb told the Post that Trump didn’t know about Cohen reaching out to Peskov. “The mere fact that there was no apparent response suggests this is a non-collusion story,” he said.

While the Moscow deal was still a possibility, Trump gave an interview to NBC in which he said that Putin is “running his country and at least he’s a leader, unlike what we have in this country.” Trump had also been praising Putin years before the election, the Times points out.