Lawyer is suspended for flashing gun at deposition, other 'appalling' behavior 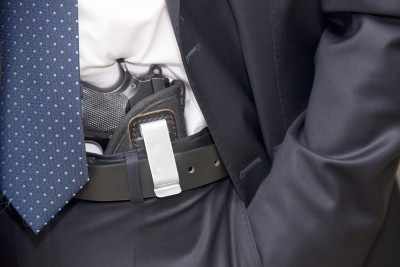 A Las Vegas lawyer has been suspended from practice for six months and a day for deposition misconduct that included flashing a gun and calling his litigation opponent derogatory names.

The incident occurred during a September 2016 deposition at Pengilly’s office where the lawyer was representing himself as a defendant in a defamation lawsuit. The person being deposed was the plaintiff.

“When questioning the deponent,” the opinion says, “Pengilly used vulgarities, called the deponent derogatory names, aggressively interrupted the deponent and opposing counsel, answered questions for the deponent, and repeatedly made inappropriate statements on the record.

“Pengilly went on to ask the deponent if he was ‘ready for it’ while positioning his hand near his hip. The deponent briefly left the room, but when he returned Pengilly displayed a firearm he had holstered on his hip to the deponent and opposing counsel.”

The deponent and his lawyer testified they were afraid Pengilly was going to shoot them, and immediately called police. The Nevada Supreme Court said there was the potential for serious injury to everyone “because a deadly weapon was involved.”

The lawyer representing the deponent, Dale Hayes, had alleged Pengilly had called his client a “dipshit” and “Big Bird,” according to prior coverage of the incident.

Pengilly told the Law Vegas Review-Journal in 2016 that he carries a gun because his father worked in a San Francisco law firm where a gunman killed eight people.

“I have it every day, all day,” he said. “I always carry a gun because I’m an attorney and people don’t like me.”