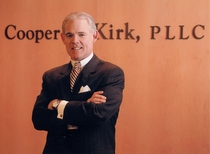 A lawyer known for his work on behalf of supporters of California’s Proposition 8, which banned same-sex marriage in the state, says he learned while working on the case that one of his own children is attracted to others of the same sex, says the author of a new book.

Charles Cooper says he is now looking forward to his stepdaughter Ashley Lininger’s same-sex marriage ceremony in Massachusetts, according to the Associated Press and the Washington Post (reg. req.).

“My views evolve on issues of this kind the same way as other people’s do, and how I view this down the road may not be how I view it now,” said Cooper in Jo Becker’s book Forcing the Spring: Inside the Battle for Marriage Equality.

Cooper’s daughter became engaged in December 2012, and he argued on behalf of the Proposition 8 supporters in Hollingsworth v. Perry in front of the Supreme Court in March 2013, reports the Washington Post. The court ruled against Cooper’s clients, and the same-sex marriage ban was overturned.

In Becker’s book, Cooper says that he left the decision of whether to announce the engagement during the litigation up to his daughter, who opted to keep the news private.

To the Post, Cooper released the following statement: “My family is typical of families all across America. We love each other; we stand up for each other; and we pray for, and rejoice in, each other’s happiness. My daughter Ashley’s path in life has led her to happiness with a lovely young woman named Casey, and our family and Casey’s family are looking forward to celebrating their marriage in just a few weeks.”

ABAJournal.com: “Meet Charles Cooper, the lawyer who will support Prop 8 in arguments today”