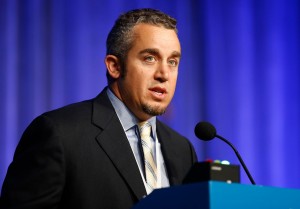 The ABA’s House of Delegates easily passed a resolution Monday calling for confidentiality in communications between lawyer referral services and their clients.

Multiple local bar groups and sections joined the Standing Committee on Lawyer Referral and Information Service in support of Resolution 106, which calls for disclosures to lawyer referral services to be treated as confidential lawyer-client communications. This is a problem, sponsors said, because only California has expressly created such a legal privilege, and lawyer referral services don’t necessarily use lawyers for front-line screening.

C. Elisia Frazier (PDF), an at-large delegate and a solo from Pooler, Georgia, turned the floor over to Steve Steinberg, past president of the Contra Costa County Bar Association in California. Steinberg said anything that hampers open communication with clients hurts lawyer referral services—and that some LRSes have been subpoenaed, which could chill those communications.

David Keyko, who chairs the Legal Referral Service Committee of the New York City Bar Association, said his bar has received such subpoenas, though it’s been able to avoid them. He was aware of at least one other group that did have to turn over its records. He added that his bar association is asking the New York legislature for a state law that would privilege the communications.

House of Delegates Chair Patricia Lee Refo said she held an “aircraft carrier load” of salmon slips in favor of the resolution but none opposing. It passed easily.

A related resolution, 10A, was divided Monday afternoon after opposition to its third paragraph arose. Delegate Michael Reed of the Pennsylvania delegation, special counsel to Pepper Hamilton in Philadelphia, said there were questions raised about whether the third paragraph is consistent with the ABA’s governing documents. That third paragraph resolves that the ABA will consider and thoroughly discuss with members who represent local bar groups before approving any program or legal service initiative that results in hiring an attorney for a fee.

Delegates approved dividing the resolution and approved the first two paragraphs, which address the proliferation of for-profit online lawyer referral services by reaffirming support for services run by local bar associations and encouraging the bar associations’ services to conform to the ABA’s Model Supreme Court Rules. The third paragraph, standing alone, was postponed indefinitely by a majority vote, though some nos were audible.

Updated at 5:50 p.m. after the House of Delegates took new action on Resolution 10A.

Previous:
ABA House calls for clearer election standards: 'Let us not return to 2000'