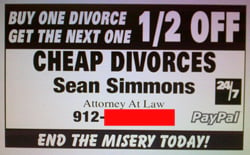 A Georgia lawyer who advertises his “cheap divorces” says this unusual offer is working: Buy one divorce, get the next for half off.

“End the misery today!” the ad says. Lawyer Sean Simmons tells the Huffington Post the ad has gotten noticed, though some dislike it. Jay Leno showed it during his “headlines” feature on the Tonight Show last year.

“Personally, I had good vibes about that ad the very day I created it,” Simmons told The Huffington Post in an email. “It has certainly worked here in Southern Georgia, though I do get a good verbal beating every few days from concerned citizens over the ad.”