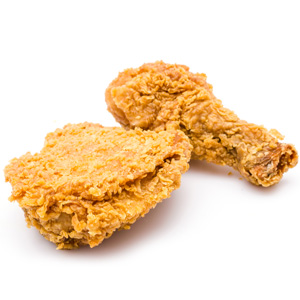 Updated: A lawyer in Gulfport, Mississippi, says in a lawsuit that he choked on a piece of chicken because Popeyes didn’t include a knife with his drive-through order.

Lawyer Paul Newton Jr. says he had to have surgery to remove the chicken from his throat last November because the only way he could consume the meat was to “hold a chicken breast in his hands and to tear off pieces thereof with his teeth.” Fox 8 and the Sun Herald have stories on his lawsuit (PDF).

Newton says he had ordered two chicken breasts, an order of red beans and rice, a biscuit and a soft drink. He got napkins and a “spork” with his order, but no knife, the suit says.

Newton maintains Popeyes has a duty to provide the appropriate utensils so customers will be able “to cut their purchased food orders into appropriate portions.”

Newton later dropped the suit, the Huffington Post reports. He told the publication did so after receiving “extreme comments directed to me and my family.”

“I continue to believe that the facts demonstrate an unsafe condition to the public that could easily be solved by the responsible parties at very little cost. I am hopeful that my filing of the court proceeding results in such remedial actions,” he said.

Updated on Nov. 4 to report that Newton had dropped the suit.