Lawyer tweets Newark mayor and gets help with his marriage proposal 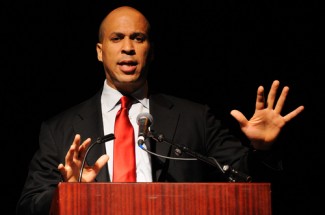 Newark Mayor Cory Booker was glad to help out when a New York City lawyer tweeted him and asked for his assistance with a marriage proposal.

Israel Burns, an associate at Seyfarth Shaw, had met lawyer Misha Wright last year at an annual bar association dinner in Manhattan, and he wanted to propose at this year’s event. Burns says he attended law school in Newark and became a Booker fan at the time. Time NewsFeed, BuzzFeed Politics, the New York Daily News and Above the Law have stories.

Burns tweeted the mayor, “Is it possible for you to lend a hand with a marriage proposal idea?” Booker replied within 10 minutes.

The plan unfolded this way. When Burns and Wright were at the bar event, Wright excused himself to go to the restroom and gave Wright his cell phone. At that point Booker called the phone. Wright at first refused to pick up, thinking the call a joke, but eventually answered. Booker identified himself and told Wright he was speaking with Burns in a balcony VIP area, and she should come join them. When Wright arrived, Burns was waiting with champagne, a ring and a poem he had written.

He proposed and Wright said yes. Booker tweeted his congratulations.