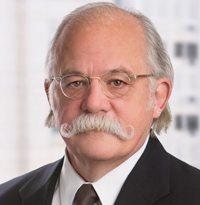 Cobb is retiring and is being replaced by Emmet Flood, who represented Bill Clinton during his impeachment, report the New York Times, ABC News, Politico and the Washington Post.

Cobb, a former Hogan Lovells partner, told the Times and ABC that he wants to retire, but will stay in his White House position for a while to help Flood’s transition.

White House spokeswoman Sarah Huckabee Sanders confirmed that Cobb is set to leave at the end of May. She also issued a statement saying that Flood “will be joining the White House staff to represent the president and the administration against the Russia witch hunt,” BuzzFeed News reports.

Cobb told ABC in an earlier interview Wednesday that President Donald Trump may still meet special counsel Robert Mueller. “It’s certainly not off the table and people are working hard to make decisions and work towards an interview,” he said.

The Times reports that Flood is expected to take a more adversarial approach than Cobb, who had advised a cooperative attitude.

Flood, a partner at Williams & Connolly, was part of a legal team representing Clinton and did not have a lead role. He served in the White House Counsel’s office during President George W. Bush’s second term, and dealt with congressional investigations.

Williams & Connolly chair Dane Butswinkas confirmed Flood’s move in a statement. “Emmet is a special lawyer and long-time member of the Williams & Connolly family. We are disappointed to lose him to the White House, but we fully appreciate Emmet’s strong commitment to public service. The White House will be fortunate to have his experienced counsel,” Butswinkas said.

The Times had reported on March 10 that Trump was speaking with Flood about joining the legal team. Trump tweeted that the Times article was “a false story.”

“I am VERY happy with my lawyers, John Dowd, Ty Cobb and Jay Sekulow,” Trump tweeted.

Updated at 2:05 p.m. to report the White House has confirmed that Flood will be joining the legal team.