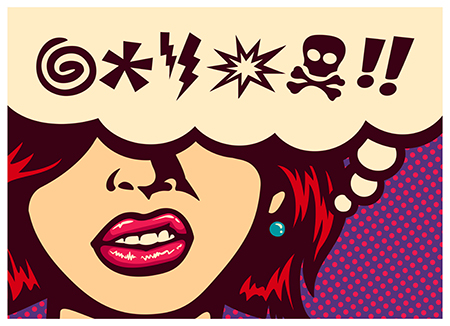 A lawyer who rolled her eyes and complained that a judge’s ruling was “f—— bull—-” has been suspended from practice in Chicago federal court for 90 days.

The executive committee of the Northern District of Illinois imposed the suspension on Chicago-area lawyer Alison Motta in an order (PDF) made public last Friday, the Chicago Tribune reports.

The order said Motta made comments under her breath and rolled her eyes several times in a trial before U.S. District Judge Amy St. Eve. In addition to imposing the suspension, the order banned Motta from acting as lead lawyer in any trials before the court for a year and required her to take ethics classes.

Motta’s bad behavior occurred during her defense of Vandetta Redwood, who was accused of giving a gun to a teenage relative seconds before the relative used the weapon to kill a 14-year-old girl. Redwood was acquitted on federal weapons charges in the January trial, the Chicago Tribune reported here.

Motta was “continuously disruptive” during the trial, which lasted about two weeks, according to the order. She “visibly reacted to testimony (such as by rolling her eyes) and made comments about the testimony, all in the presence of the jury,” the order said. “Other instances of misconduct were even directed at the trial judge’s rulings on objections. After unfavorable decisions on objections, Ms. Motta would shake her head, roll her eyes, and make comments under her breath.”

The “F—— bull—-” comment was one “particularly egregious instance,” the order said.

Motta’s lawyer, James Doppke, told the Tribune in a statement that Motta “sincerely regrets that she projected her frustration with the system in her demeanor” and she “looks forward to moving past this unfortunate situation.”

He also said the comment Motta made after the judge’s adverse ruling was made under her breath, but sensitive microphones caught the remark.