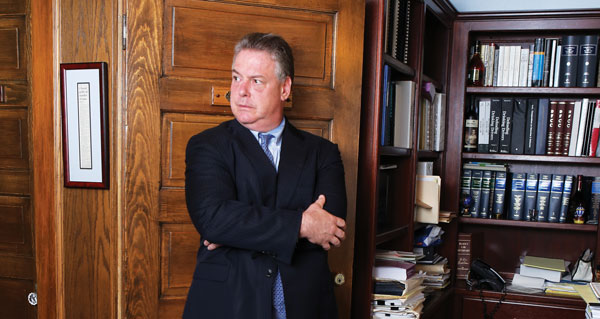 A California lawyer who filed a $10 million suit over a courthouse brawl in Santa Ana has been hit with a $250,000 punitive damages verdict in a countersuit.

Criminal defense lawyer James Crawford was found liable in a countersuit by the man he deemed responsible for the fight, Dillon Alley, report the Orange County Register and MyNewsLA.com. At the time of the incident, Alley was an investigator for the District Attorney’s Office. He is now retired.

Crawford had claimed the March 2016 incident began after words were exchanged about sleaziness, and Alley flicked a large paper clip at him. Crawford said he threw it back, and Alley began to beat him. He sued both Alley and Orange County.

Alley had maintained in his counterclaim that Crawford used the F-word several times before Alley flicked the paper clip, and Crawford threw the first punch.

No criminal charges were filed in the altercation.

Jurors found Crawford and Alley were both liable for battery, and they were responsible for paying each other’s medical bills. The bills were $11,400 for Alley and $15,215 for Crawford. Jurors found that Alley did not use excessive force and did not violate Crawford’s right to free speech.

Jurors imposed punitive damages based on its finding that Crawford had acted “with malice, oppression or fraud” against Alley.

Crawford’s lawyer, Jerry Steering, said he is considering a motion for a new trial and planning an appeal. He believes the mostly female jury was swayed by allegations that Crawford was biased against prosecutors and was once reprimanded by a judge for calling a female prosecutor an expletive.

Corrects last name of lawyer in last paragraph at 2:47 p.m.