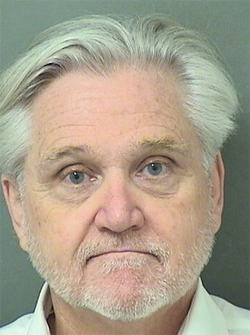 A Florida lawyer who told a judge he was appalled by her behavior and she was “disrespectful to the people” spent several hours in jail on Wednesday before a state appeals court ordered his release.

Bryson said she was sending Carter to jail for his claim that he never received a notice of a required court appearance, rather than for his comments last Friday.

“You know it’s a bad day for you when your lawyer goes to jail,” Carter’s client, Todd Talbott, commented to a courtroom deputy after Wednesday’s hearing, according to the Post.

Bryson had issued a warrant for Talbott’s arrest after he didn’t show up for a hearing in his DUI case last November, but he wasn’t arrested until last Thursday. Carter insisted in court the next day that he never got the hearing notice and someone must have forged his signature on it.

Bryson reinstated Talbott’s bond but refused Carter’s request that she look into the purported forgery. Later in the hearing, Carter complained that he didn’t like waiting until 10:10 a.m. for a hearing that had been set for 8:30 a.m. Bryson said the time must have been a mistake because deputies bringing inmates to court don’t arrive that early.

“I think you’re disrespectful to the people of Palm Beach County. I’m appalled,” Carter said. “Never in my 35 years of practice have I ever experienced anything like this.” He also told the judge he had spoken with other lawyers who had the same complaints about her.

Bryson went on to explain she is an experienced judge with other lawyers in the family. Carter told the judge he thought her comments were inappropriate and he asked what is wrong with her.

At Wednesday’s contempt hearing, Bryson played a video of Talbott’s arraignment that showed Carter walking over to the clerk’s desk, and walking back into camera range while holding several sheets of paper. A clerk logged in the notice for the November hearing at that time.

“I don’t know what those papers were, but I know, 100 percent, that it was not a notice, and if it was I didn’t know it was,” Carter said at the contempt hearing.