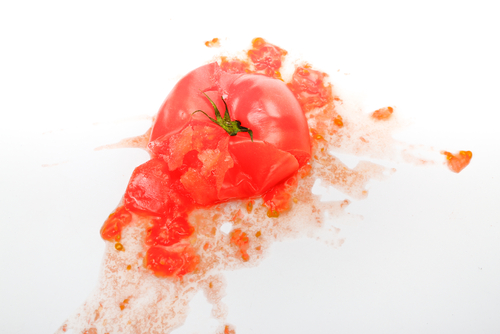 Opposing counsel should be sanctioned for releasing deposition testimony in which former President Donald Trump expressed his fear of being hit by hurled fruit, according to a motion filed by Trump’s lawyers.

Trump’s motion, filed April 29, seeks sanctions against lawyers representing human rights demonstrators who allege in a 2015 lawsuit that they were “violently attacked” by Trump’s security guards in front of the Trump Tower, report the New York Post and People.

In the October 2021 deposition, Trump explained why he remarked at a February 2016 event that, if spectators “see someone getting ready to throw a tomato, just knock the crap out of them, would you?”

“It was very dangerous,” Trump said. “We were threatened.”

“With what?” Trump was asked.

“They were going to throw fruit. We were threatened; we had a threat.”

Trump said he was speaking to the audience when he made his remark.

“It was said sort of in jest,” he said. “But maybe, you know, a little truth to it. It’s very dangerous stuff. You can get killed with those things.”

The questioner then asked whether Trump told his security personnel to “knock the crap out of” anyone ready to throw a tomato.

“Well, a tomato, a pineapple, a lot of other things they throw,” Trump said. Security has to be aggressive “to stop somebody from throwing pineapples, tomatoes, bananas, stuff like that, yeah, it’s dangerous stuff.”

Lawyers for the lawsuit plaintiffs had attached the deposition to a court filing.

The sanctions motion says lawyers for the protesters released Trump’s fruit deposition “without justification or reason,” making Trump’s testimony available to the media, the potential jury pool, and former Trump lawyer Michael Cohen before his deposition in the case.

Most of the deposition testimony has no relevance to the issue of whether Trump had knowledge of the alleged September 2015 incident involving the security guards, the motion says. Trump has always maintained that he had no knowledge of the incident until after it happened, and that fact is not in dispute, according to the motion.

But Cohen has claimed that he heard Trump tell security to get rid of the protesters, according to the New York Post.

Trump’s motion describes Cohen as “a disgraced attorney and convicted felon.” Cohen was sentenced to three years in prison in December 2018 for bank and tax fraud, campaign finance violations and lying to Congress.

One of the lawyers suing Trump, Benjamin N. Dictor, responded in a court filing that the motion for sanctions was frivolous. He in turn said Trump’s legal team should be sanctioned for filing the sanctions motion.

Dictor is representing the plaintiffs, along with lawyer Roger J. Bernstein. Trump’s current lawyers in the case are Alina Habba and Jeffrey Goldman.