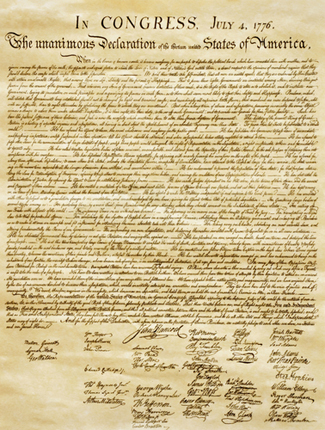 The Declaration of Independence. Image from Shutterstock.

Lawyers in cities and towns throughout the country took time Tuesday to read aloud the Declaration of Independence at their local courthouses.

A grassroots custom that has been ongoing in Houston for the last several years, the public readings took place in at least 12 states and the District of Columbia, according to the Houston Chronicle.

A post on the newspaper’s website includes video clips of the event and notes that the reading outside the Harris County Criminal Justice Center included many well-known members of the local criminal defense bar.

“This started three years ago with an idea that the people who defend the principles of freedom ought to come every year on July 3 and support the country,” said Chris Tritico, who serves as president of the Harris County Criminal Lawyers Association.

“We think it’s important that criminal defense attorneys read this aloud because we really are the ones who every day defend the principles of freedom.”

Defense attorney Robert Fickman organized the readings, which the newspaper said also occurred in Alabama, Arkansas, California, Colorado, the District of Columbia, Georgia, Kansas, Michigan, Mississippi, New Mexico, South Carolina and Utah. Fickman told the newspaper he got the idea from a family custom of having his children read the first and last page of the Declaration of Independence before diving into the barbecued food.

Defense attorneys read the Declaration of Independence aloud in 23 counties in Georgia alone, according to the Decatur-Avondale Estates Patch.

WMGT gives a brief account of the reading at the state’s Bibb County courthouse, and the Marietta Daily Journal notes that a reading took place at the Cobb Superior Court.

At the Dekalb County Courthouse in Decatur, Ga., the Patch article reports, lawyers reading the Declaration had a built-in crowd awaiting them—those who had gathered in anticipation of the monthly foreclosure auction.

Similar readings took place this week in multiple courthouses throughout the country, including:

• Cullman County, Ala., where the defense bar coordinated with the district attorney’s office and county bar association to arrange the reading, the Cullman Times reports.

• Kenyon Plaza in Hall County, Ga., according to the county’s website, the Daily Report’s ATLaw blog and AccessNorthGa.com.

• Sedgwick County Courthouse, in Kansas, per the Wichita Eagle.

• Navarro County Courthouse, in Texas, per the Corsicana Daily Sun.

• Ogden, Utah’s 2nd District Court, as detailed in the Standard-Examiner.

Plus see this video featuring San Diego Criminal Defense Attorneys Reading the Declaration of Independence (reading begins at about the 5:40 minute mark):