Lawyers no longer dominate Congress; is commercialization of profession to blame? 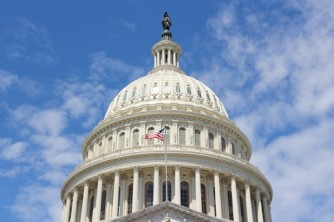 Lawyers once dominated Congress, but they are being “squeezed out” today by those who have made politics a career, according to a new research paper.

In the mid-19th century, nearly 80 percent of members of Congress were lawyers, according to the paper (available here). The percentage fell to less than 60 percent in the 1960s and less than 40 percent in 2015. The Washington Post covered the findings by study author Nick Robinson, a visiting lecturer at Yale Law School and an affiliated fellow at Harvard Law School’s Center on the Legal Profession.

The decline of lawyers in Congress is even more striking because of the increase of lawyers in the United States, both in overall numbers and in a percentage of the population, the paper says.

Robinson attributes lawyers’ declining dominance in politics not only to the rise of politics as a career, but also to broader changes in the profession.

The “professionalized political class” includes campaign aides, lobbyists, members of think tanks, and employees in public-interest jobs, Robinson says. These jobs provide “an alternative gateway to political office.” Most members of Congress with these backgrounds are not lawyers, he writes.

The profession has also changed, Robinson says. “While in the 19th century, stories abounded of the public coming to courtrooms to listen to the oratorical skills of top lawyers and to be entertained by the cases of the day, by the end of the century many of the elite lawyers moved from the courtroom to the corporate boardroom. Top lawyers no longer required large public followings to bring in business,” he writes.

In addition, the financial incentives of corporate law practice may keep lawyers in private practice, Robinson says. He also notes arguments that the commercialization of law practice may have led to a loss in the profession’s “collectivist public spirit.”

In the current Congress, the best represented law schools are Harvard (19 members), Georgetown (14), and the Universities of Virginia and Texas (seven each).