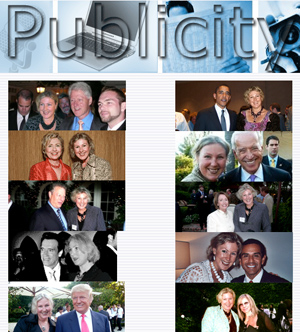 A lawyer who apparently photoshopped her image into pictures of celebrities and posted them on her website is facing a possible suspension after failing to cooperate in the resulting bar probe.

A California bar court judge recommended a six-month suspension for Svitlana Sangary, saying the photos amounted to deceptive advertising, the Recorder reports. The bar court judge’s opinion (PDF) also said Sangary failed to cooperate in bar probes and delayed the return of case files to a client who fired her. The bar probes were launched to investigate the website photos and a client’s complaint that she failed to arbitrate a fee matter before filing suit.

The photos showed Sangary with several politicians and celebrities, including President Obama, Bill Clinton, Hillary Clinton, George Clooney, Donald Trump, Arnold Schwarzenegger, Morgan Freeman and Paris Hilton. An expert testified that Sangary had apparently manipulated most if not all of the photos to add her image into them.

Sangary had the altered pictures on her website from at least December 2012 to the ethics trial date on July 8, 2014, the opinion said. The Recorder says the website photo page is no longer available, but the publication links to this prior version.

When she eventually responded to the bar’s allegations, Sangary filed documents described by the bar court judge as “bizarre” and having “little to no rational connection to the charges at hand.” The opinion included examples, including this one:

“Sangary’s American dream has come true, as she has been able to achieve a point wherein now, in her thirties, Sangary is a prominent donor and philanthropist, supporting important social causes, who had recently received the email from President Obama with the subject line ‘I need your help today,’ asking SVITLANA SANGARY for an additional donation.”

The bar court judge also recommended a three-year probation period, along with the six-month suspension. The opinion also said Sangary should be required to take and pass the Multistate Professional Responsibility Exam.

Sangary did not respond to the Recorder’s messages.