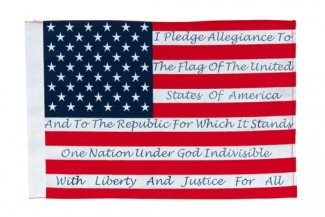 A lawyer who is a commissioner for a park district in suburban Chicago has taken a stand against standing for the Pledge of Allegiance, leading the American Legion to withdraw funding for special events at the district.

Morton Grove Park District Commissioner Dan Ashta says putting the Pledge of Allegiance on the meeting agenda makes him feel that the district is compelling people to speak, the Morton Grove Champion reports. “So you either stand up and say it or you don’t,” he said during his commissioner’s report at last Thursday’s meeting, “but either way you’re making a statement. If you come to the meeting, you don’t have a choice but to make a statement.”

Ashta spoke after the commander of the American Legion’s Post 134 announced at the meeting that the group was withdrawing financial support for park district programs as a result of Ashta’s position, the story says. The Legion contributes $2,600 throughout the year to support fireworks, an annual party in the park, and Halloween and Easter celebrations.

Post 134 Commander Joseph Lampert said his group was withholding funds until everyone stands for the pledge. He said his group supports the right to not stand during the pledge, but does not accept it, according to the Morton Grove Champion account. “We feel that it’s disrespectful to all veterans that have been willing to sacrifice their lives for this country and it is a great dishonor to all servicemen and women who have paid the ultimate sacrifice and died for this country,” he said.

Ashta lists his areas of professional interest as animal law, constitutional law, environmental law, and property law. When he was running for commissioner, he told the Bugle that his campaign didn’t use signs, part of an effort to minimize waste.

Audio of them meeting is available at this link. The North Shore Voice Facebook page, with photos from the meeting, is here.

Updated on Oct. 29 to add meeting audio and a Facebook link.