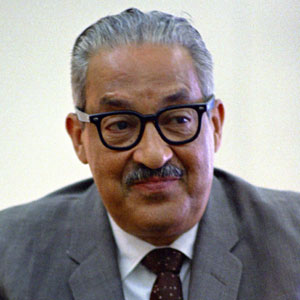 Thurgood Marshall in 1967. Photo from the National Archives and Records Administration.

A film about Justice Thurgood Marshall’s early life and his work defending a black man accused of rape will begin filming in Buffalo, New York, in May.

Chadwick Boseman will star as Marshall in the film directed by Django Unchained producer Reginald Hudlin, report Buffalo.com, WGRZ and Syracuse.com. Bridgeport, Connecticut, lawyer Michael Koskoff co-wrote the screenplay with his son, screenwriter Jacob Koskoff, according to December 2015 stories by Variety and the Hartford Courant.

The film focuses on a Bridgeport case in which Marshall joined insurance lawyer Sam Friedman to defend a black chauffeur accused of raping his white mistress in 1940. Friedman’s daughter, Lauren Friedman, is a friend of Michael Koskoff’s.

“It’s the story of two young lawyers, one black, one a Jew, in a time of a huge amount of antisemitism and racism,” Michael Koskoff told the Hartford Courant.

The screenplay “started out as an anatomy of this one trial. It evolved into something more than that,” Koskoff told the newspaper. “This story is shown within the context of Thurgood Marshall’s early life. In that year of his life, he found out who he was and what kind of a courageous person he was.”

Koskoff’s firm handles personal injury and malpractice cases. He says the Thurgood Marshall case appealed to him because he handled civil rights cases in the 1960s, as well as cases to integrate fire and police departments in Bridgeport and New Haven.

The film isn’t being made in Connecticut because the state has a moratorium on filmmaking tax credits. Tax credits are being offered in New York.