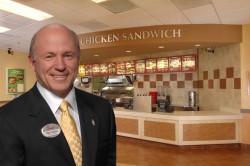 Legal scholars and civil liberties advocates are expressing constitutional qualms about a Chicago alderman’s plan to ban Chick-fil-A from his ward because of the company president’s stance against gay marriage.

Alderman Proco Joe Moreno plans to block the restaurant in response to comments by Chick-fil-A president Dan Cathy, who said he is he is “guilty as charged” for supporting marriages only between a man and a woman. Moreno explained himself in an editorial. “There are consequences for one’s actions, statements and beliefs,” he wrote. “Because of this man’s ignorance, I will deny Chick-fil-A a permit to open a restaurant in my ward.”

The Volokh Conspiracy says denying a business permit because of an expressed view “is a blatant violation of the First Amendment.” Adam Schwartz, senior attorney for the American Civil Liberties Union of Illinois, agrees in an interview with Fox News. According to the story, communities withdrawing the welcome mat for Chick-fil-A “don’t have a drumstick to stand on.”

Moreno dismissed First Amendment concerns in an interview with the Chicago Tribune. “You have the right to say what you want to say, but zoning is not a right,” he told the newspaper.