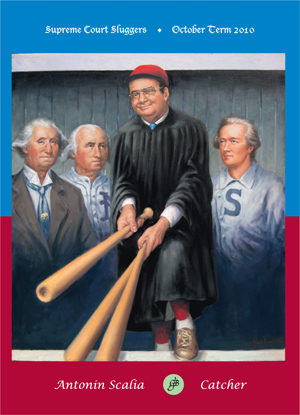 Image from The Green Bag

While major league baseball rushes to its pennant races, The Green Bag quarterly legal journal pitches its latest card in the Supreme Court Sluggers series. Released this month is the Justice Antonin Scalia card, with the justice on the cover donning the same hitter’s pose seen on the classic card of 1920s-40s Hall of Fame catcher Rick Ferrell, known as the game’s best knuckleball catcher.