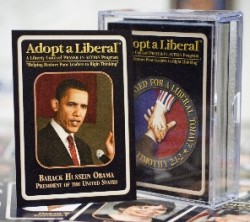 For $20, liberal detractors can buy the deck of cards, featuring 51 liberals and an “unknown” liberal card that can represent their liberal of choice, the Washington Post reports. The cards come with instructions that say: “We encourage you to seek the Lord’s guidance on how to pray for your liberal(s), always allowing God to temper your prayer with his love and mercy.”

A press release on the playing cards features a trademark designation after the “Adopt a Liberal” name.

One of the liberals portrayed is the Rev. Barry Lynn of Americans United for Separation of Church and State. He told the Post he welcomed the designation, although he hoped there would be some limits on the prayer requests. “I like to stay up late,” he said, “and I’m not doing any chores around the house.”