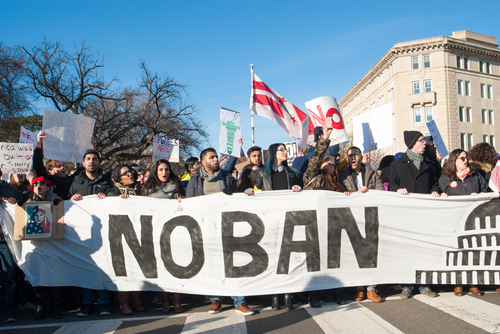 In March, a Maryland federal judge found the travel ban violated the First Amendment by focusing on countries with predominantly Muslim populations, the Washington Post reported.

In Virginia, a federal judge on March 24 refused to block the order, finding the administration’s revision to the ban no longer lists religion as criteria, and instead cites national security reasons regarding the countries in question.

Attorneys general from 16 states and the District of Columbia filed a 4th Circuit brief against the federal government’s position. The filing argues that the ban, if implemented, would hurt higher education, medical institutions, and the tourism industry, The Associated Press reported.

The American Bar Association has filed amicus briefs opposing the travel ban in both the 4th and 9th Circuit appeals.

“As the voice of the legal profession, the ABA has a special interest and responsibility in safeguarding the integrity of our legal system,” the 9th Circuit brief reads. “Preserving and promoting robust judicial review of executive action goes hand-in-hand with these responsibilities, particularly where executive action encroaches on the Constitution’s fundamental protections or important statutory protections.”

The 9th Circuit oral arguments took place Feb. 7, and can be heard here.

In the 4th Circuit, oral arguments are scheduled for May 8, the Los Angeles Times reported.