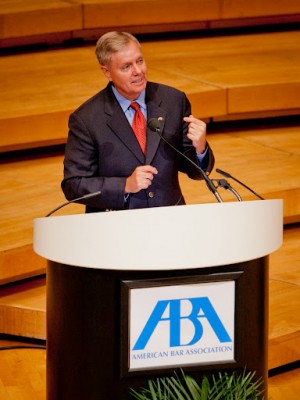 Politics is putting the independence of the federal judiciary at risk, Sen. Lindsey Graham said this evening in his keynote speech at the opening assembly of the ABA Annual Meeting.

“I’m really worried about how we’re doing confirmations,” said Graham, a Republican from South Carolina who serves on the Senate Judiciary Committee. “They’re turning into political events. I’m a conservative, and I’d like conservative judges on the federal bench,” Graham said, but if President Barack Obama is re-elected in November, then “his nominees are entitled to be confirmed as long as they’re qualified.”

Expressing concerns that the confirmation process is becoming a litmus test for the political philosophies of nominees, Graham said, “The question is, are you qualified? It’s stupid to pick on something you said in law school, and pick on this or pick on that. I’m not worried about judicial activism. I’m worried about Senate activism.”

Another threat to an independent judiciary—which Graham called “the heart and soul of American democracy”—is a failure by Congress to pay federal judges higher salaries. It used to be, he said, that about two-thirds of federal judges came from the private sector. Now, most of them come from the public sector.

Graham also acknowledged the growing money shortages that courts are facing on all levels, and he cited the ABA’s efforts to raise awareness about the financial problems facing courts, particularly at the state level. Part of the problem, he said, is that “the easiest thing for a politician to do is make cuts where people complain the least.”

Graham also praised the ABA’s growing role in addressing the legal issues raised by threats to cybersecurity in the public and private sectors. “The biggest threat we face is a cyberattack from someone who hates our guts,” he said.

Graham opened his speech with a flurry of one-liners. Coming to the stage just as the Chicago Mass Choir offered a rousing version of “Sweet Home Chicago,” Graham said, “Why did I have to follow the choir?”

He also suggested his predecessor in the Senate, Strom Thurmond, may have been present when the ABA held its first meeting in Chicago—in 1889. “In South Carolina, we elect a new senator every 50 years,” Graham said.

But Graham closed his brief-but-pointed speech by praising the vital role of the rule of law in society: “Let’s protect and nurture it at home, and spread it around the world.”