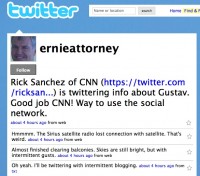 If Hurricane Gustav is anything like 2005’s Hurricane Katrina, lawyers who blog will be cut off from the outside world when the storm comes ashore and the power goes out. But Twitter—a microblogging service that limits posts to 140 characters and can be updated and read from cell phones—may provide a way they can stay in touch with the outside world.

Ernest Svenson—a New Orleans solo practitioner and one of the earliest legal bloggers, known online as Ernie the Attorney—has turned to Twitter to stay in touch during the storm. He’s planning on riding out Gustav behind the storm shutters of his high-rise condo in the Uptown neighborhood. You can follow his Twitter feed here.

Here’s how he expects it to play out, in his own words from an e-mail interview conducted early Sunday afternoon:

“During Katrina, the only sort of reliable way of communicating was with text messages. The cell phone network got clogged pretty quickly with people trying to contact loved ones, etc. So calling people was not possible. But text-messaging worked pretty well.

“This problem has already started again. I have a friend who lives in Dallas (she moved after Katrina), and her 504 area code cell phone is already having problems. Even though she’s in Dallas. This is typical of what happened in Katrina. Didn’t matter where you were; if you had a phone based in the 504 area code, you couldn’t make calls.

“But I can text-message, and so can she. So I’m assuming that text-messaging will work. Twitter is basically blogging via text messaging. So I’ll be able to post short ‘tweets,’ as they call them, and I only have to do it once and it is uploaded to a place where people can read about what’s going on. Last time, I tried blogging, but that stopped as soon as the power went out and I lost my internet connection.

“I plan to update as much as I can, given the constraints. But I hope to do it a couple of times a day at least. My iPhone has an application that lets me not only post but also read short Twitter messages. Hopefully, I’ll be able to read as well as post.”