Philip Corboy, a 'Jack Nicklaus of Trial Lawyers,' Dies at 87 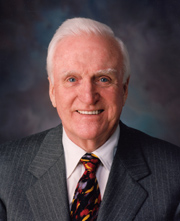 Philip Corboy, one of Chicago’s best-known and longest practicing trial lawyers, died at his home in the city early Tuesday. He was 87 years old.

A personal injury lawyer known for his big-verdict cases, bar leadership and generous mentoring of others, he had practiced for more than 50 years at the law firm he founded, Corboy & Demetrio, according to the Chicago Tribune.

Illinois Appellate Judge Terrence Lavin clerked for Corboy’s firm in the early 1980s, and worked there for four years afterward. Corboy, he told the Tribune, was in the front row when he was sworn in two years ago.

“He was just an amazing man, the word legendary is overused but it was aptly used for him,” Lavin said. “He was the Jack Nicklaus of trial lawyers, he was a guy who was great across the decades.”

Corboy and his wife, Mary Dempsey made a record contribution in recent years to Loyola University Chicago School of Law, from which Corboy graduated first in his class in 1949. The exact amount was not disclosed, but the previous record donation was a $5 million gift in 2006.

“It’s an extraordinary loss for the profession, and so many members of the trial bar who were taught how to excel in the representation of their clients,” said Robert A. Clifford, another major name in personal injury law in Chicago, who credits Corboy for much of his success.

“Phil was an extraordinary mentor and great personal friend to such an array of people,” Clifford told the ABA Journal. “It’s going to be very hard to get used to living in a world without him as a guiding light about how to do it the right way.”

Clifford said he first met Corboy in 1974, when he was a law student at DePaul University. Bowled over after seeing Corboy lecture, Clifford asked a law professor on the spot how he could get a job with someone like Corboy.

The professor said it wouldn’t happen, since Corboy never hired from DePaul, but Clifford wasn’t daunted. Looking up Corboy in the yellow pages, he hustled over to his law office and told the receptionist he was a DePaul law student with one more question about the lecture Corboy had just given.

Corboy agreed to talk, and asked what the one question was. “How do I get a job with a guy like you?” Clifford asked him. Impressed with Clifford’s audacity, Corboy said he would hire him if he got a good recommendation from DePaul. “I was working for him within a week,” Clifford recounts, although he didn’t become a lawyer until two years later.

Clifford stayed at the firm for over a decade, then went out on his own in 1994, when Corboy & Demetrio briefly merged with Clifford’s firm and put his name on the marquee. “That merger failed,” says Clifford. “But within six months we were working together on other matters.”

A former chairman of the ABA Section of Litigation who is currently president of the Chicago Bar Association, Clifford credits Corboy with having pushed him toward bar leadership. “If it wasn’t for him, I don’t think I would ever have had the bar association commitment that I have demonstrated my entire career.”

Corboy is survived by his wife; three sons, one of whom, Philip Harnett Corboy Jr., is a partner in Corboy’s firm; and eight grandchildren. Another son died at age 12 and Corboy’s only daughter, Cook County Circuit Judge Joan Marie Corboy, died over a decade ago in an accident while on vacation in Florida.

A funeral will be held at 10 a.m. Saturday at Holy Name Cathedral in Chicago.