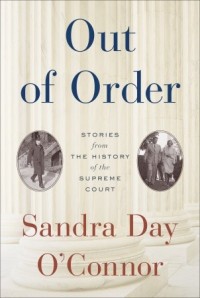 But those looking for a “succinct, snappy account” of the Supreme Court’s history should pick up the latest book by the retired justice, the New York Times reports. The Christian Science Monitor also has a review of the book, Out of Order: Stories from the History of the Supreme Court.

“This book is all about the facts, just the facts,” the Christian Science Monitor says. “In the beginning, in 1789, the Supreme Court was smaller (six members), had no neoclassical building to call home, and, frankly, didn’t have a whole lot to do. It heard no cases in its first four terms. Justices were appointed and often bolted as soon as something better came along.”

O’Connor reports that early court records “were rife with textual errors, corrections and revisions,” according to the Times account. Written opinions weren’t required until 1834. Travel was a requirement, as justices spent as much as six months a year serving on trial courts. The roads were rough, and so were the accommodations; justices “were sometimes forced to share rooms with unsavory characters,” O’Connor writes.

MSNBC published an excerpt. “So many aspects of the court were shaped and developed little by little, year by year, person by person,” O’Connor writes. “The court was a daring, bold, but risky political experiment, and its beginnings were modest and uncertain.”