Lots of ideas, but no single theme at Commission on the Future of Legal Services' public hearing 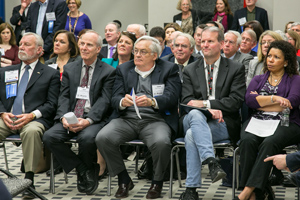 Audience members listen to the speakers at the ABA Commission on the Future of Legal Services’ public hearing at the 2015 ABA Midyear meeting in Houston. (Photo by Kathy Anderson.)

When the ABA Commission on the Future of Legal Services scheduled a public hearing for the midpoint of the association’s 2015 Midyear Meeting in Houston, it was hoping to hear plenty of ideas about how to improve access to justice for underserved segments of the U.S. population.

And that’s exactly what the commission got by the end of the hearing on Saturday afternoon–which featured 19 speakers testifying in rapid-fire succession in just over three hours.

But the hearing did not produce a single “grand theme” suggesting an easy answer on how to close the gap in the delivery of civil legal services, especially for individuals and families with low or moderate incomes. That would have been impossible, given the broad spectrum of interests represented by the people who testified.

They included representatives of LegalZoom and Avvo; two state supreme court chief justices; individual practitioners; members of several ABA entities and state bar associations; Patricia Salkin, the dean of Touro Law Center in Islip, New York; Lisa Foster, the director of the Access to Justice Initiative in the U.S. Department of Justice; and Andrew Grech, a lawyer at Slater and Gordon in Melbourne, Australia, whose testimony was heard by speaker-phone.

One lawyer came in search of help in getting Texas bar regulators to allow her to establish a limited unbundled law practice, in which she would do certain work for clients on their cases for a set fee but would not be responsible for handling the entire matter. Lee DiFilippo, who is an attorney in Austin, said her case is now before the Texas Supreme Court. “My gut feeling is they just don’t know what to do with a lawyer like me,” said DiFilippo. “I’m pleading for help on this.”

Grech was one of a handful of witnesses who raised the issue of whether access to justice might be improved if nonlawyers become more involved in the ownership of law firms and the delivery of legal services in the United States. The United Kingdom, Australia and Canada are among the countries where such concepts are taking hold. Nonlawyer ownership of law firms has been a non-starter with the ABA, but Kenneth Grady, the “Lean Law Evangelist” of SeyfarthLean Consulting, said the association needs to be more transparent in how it looks at alternative business structures. The problem, he said, is that “the public doesn’t understand why the ABA won’t allow ABS.”

Paris Eliades, the president of the New Jersey State Bar Association, expressed a more antagonistic view on the issue that is widely held within the organized bar. Eliades, an attorney in Sparta, New Jersey, said his bar takes an aggressive stance toward nonlawyer providers, partly out of concern that conflicts of interest might arise for companies seeking to offer legal services and partly because there are many young lawyers struggling to build their own practices. But, he acknowledged, “without that problem I might feel different about the issue.”

After the hearing, commission chair Judy Perry Martinez, who was formerly chief compliance officer and a vice president at Northrop Grumman Corporation, gave her take on the afternoon’s testimony. “I think there’s an acknowledgement that change has to happen,” said Martinez. “Lawyers realize we’re not meeting the needs of the public, and there needs to be a combination of solutions. But what’s the priority, lawyers or the public? I think those interests align. The interest of the client, the interest of the public, has got to be the guiding light.”

The Commission on the Future of Legal Services was created by the ABA Board of Governors in August 2014 at the request of incoming President William C. Hubbard, a partner at Nelson Mullins Riley & Scarborough in Columbia, South Carolina. The commission is planning a National Summit on Innovation in Legal Services that will be held on May 2-4 at Stanford University in California. After that, the commission will start work on a report and recommendations to the ABA’s policy-making House of Delegates.