LSAT to start transitioning to digital format in 2019 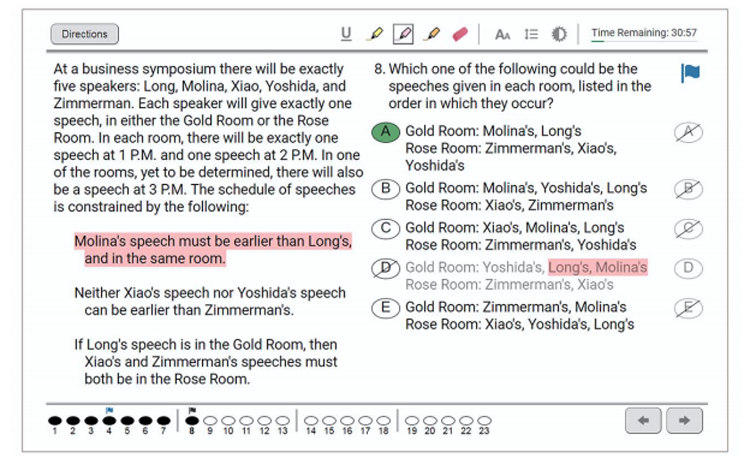 Starting in July 2019, the Law School Admissions Test will begin transitioning to a digital format.

For the first test, some examinees will be assigned to take the test with a tablet device and others will use paper and pencil, according to a news release from the Law School Admission Council, which administers the LSAT.

The LSAT will be offered only in a digital format in North America starting in September 2019.

A digital format will allow students and schools to receive LSAT scores quicker, according to the release. With security a concern, the LSAC developed and patented software for test. The release includes a screenshot of the digital offering, which shows that test-takers will be able to highlight portions of questions, rule out answers and see how much time they have remaining.

“The structure of the test sections and test questions will not be any different than the paper-and-pencil LSAT, and we’ll be providing free online tutorials, so we don’t think test-takers will have any problems moving to the digital version,” Kellye Testy, admission council president and CEO, said in the release, adding that in field tests the digital format was “easy to use.”

Also, those who take the July 2019 LSAT will be allowed to see their scores before deciding if they wish to cancel it, and can retake the exam for free through April 2020, the release states. That will apply to people who take the test digitally or with pencil and paper. According to the release, the LSAT will be offered nine times during the 2019-20 testing cycle, up from six times in the current cycle ending on April 1.

The Graduate Record Examination, which law schools have increasingly used as an entrance exam in addition to the LSAT, currently tests in both digital and paper formats, but the latter is only offered in areas of the world where digital testing is not available, according to the website for Educational Testing Services, which designs and administers the GRE. The GRE is offered throughout the year at testing centers, and test-takers can take the exam once every 21 days, up to five times during a continuous rolling 365-day period, the website states.

Corrects second paragraph at 1:13 p.m. to show that some students will be assigned the test in the digital format.