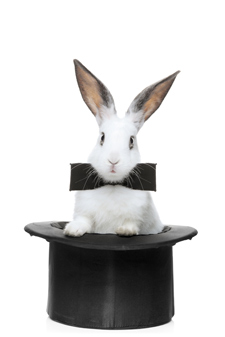 Marty the Magician received a letter this summer from the U.S. Agriculture Department informing him that he needed a disaster plan for his rabbit.

Magician Marty Hahne learned he needed a license for his rabbit when a USDA inspector showed up at one of his magic shows in 2005, the Washington Post reports. Hahne complied. He is among several children’s magicians required to get a license under a 1970 law covering animals exhibited at shows.

To get his license, Hahne paid $40 a year, took his rabbit to the vet and submitted to surprise inspections of his home. He must prepare an itinerary if he takes the rabbit away from home for an extended period. Because of a new rule proposed after Hurricane Katrina, he was told he needs a disaster plan to save the rabbit from a variety of calamities. “Fire. Flood. Tornado. Air conditioning going out. Ice storm. Power failures,” Hahne explained to the Post.

The article questions the provision. “For Hahne,” the story said, “the saga has provided a lesson in one of Washington’s bad old habits—the tendency to pile new rules on top of old ones, with officials using good intentions and vague laws to expand the reach of the federal bureaucracy.”

Apparently Agriculture Secretary Tom Vilsack shares those concerns. After the Washington Post published its article online, a department spokeswoman announced that the rule will reviewed as it applies to small operations. Vilsack “asked that this be reviewed immediately and common sense be applied,” spokeswoman Courtney Rowe told the newspaper.