U.S. Supreme Court Chief Justice John Roberts, speaking to the ABA House of Delegates, delivered some choice humor, an informative lecture on the history of Magna Carta and a call for lawyers to advance the historic document’s ideal for the rule of law and particularly for independent courts.

Roberts’ address Monday launched the association’s year-long, 800th-anniversary commemoration of Magna Carta, which will culminate in June 2015 with a ceremony at Runnymede in England, where the document was sealed by King John of England in 1215. The king agreed to the supremacy of law in limiting his powers over land-owning barons, in effect planting the seed for the rule of law.

At the outset of his speech, Roberts said that a few months ago a tourist guide at Runnymede asked his group for questions. One asked when the document was signed. The tour guide said 1215. And the tourist turned to his wife and said, “See, I told you we shouldn’t have stopped for lunch. We just missed it.” 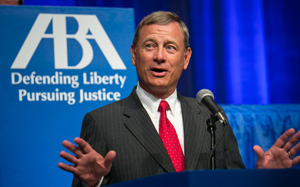 There were plenty of laughs, but they grew to a roar when Roberts delivered this flourish: “If you don’t like that, you try coming up with a Magna Carta joke.”

Roberts’ speech included an expansive lecture on Magna Carta’s history, noting first that he got the information from an article in the June 1957 issue of the ABA Journal. That year the association erected a monument at Runnymede honoring the document, and it is being refurbished, with completion expected for rededication ceremonies next June.

On Friday at this ABA annual meeting, the association unveiled a traveling exhibit curated by the Law Library of Congress, “Magna Carta: Enduring Legacy 1215-2015.” It will move to various cities around the country, as well as at the ABA London Sessions next June in England. In November, the Library of Congress will host one of the four remaining 1215 manuscripts.

The chief justice, in a heavily detailed presentation chocked with names, dates and events over the centuries, outlined how Magna Carta initially and going forward was invoked to foster government unity in times of crisis. Roberts also discussed how Magna Carta contributed to the rise in representative government, beginning with concerns over taxation and later encompassing other issues of public concern; and how writings about the document by Sir Edward Coke, the great English jurist of the 15th and 16th centuries, had an impact on the founders of our country.

Roberts touched on parts of Magna Carta to highlight direct lines to some of our most fundamental principles, such as being tried by a jury of peers; the concept of “the law of the land”; and how criminal penalties should match the severity of the offense.

Moving on to more recent times, Roberts noted: “We live in an era in which sharp partisan divides within our political branches have shaken public faith in government across the board.”

The judiciary can help remedy that with its own work by exercising independent judgment, making sound decisions, and carefully explaining their reasoning, he said. He added that the judiciary also relies on the bar’s skill and professionalism to help.

Lawyers have often participated in partisan disputes throughout the nation’s history, he said, “to great beneficial effect.”

“But lawyers fulfill their professional calling to the fullest extent when they rise above particular partisan debates and participate as problem solvers,” the chief justice said, whether through the ABA’s committees, pro bono service, through public service or helping the public understand issues.

We have given Magna Carta’s core concepts concrete meaning and new meaning in our constitutional framework, Roberts said, and independent courts have ensured accountability to the law such that no person, no matter how high, is above the law.

“I encourage all of you as officers of the court to set your sights on the far horizon and ensure that our legal profession continues to advance that ideal,” Roberts said.