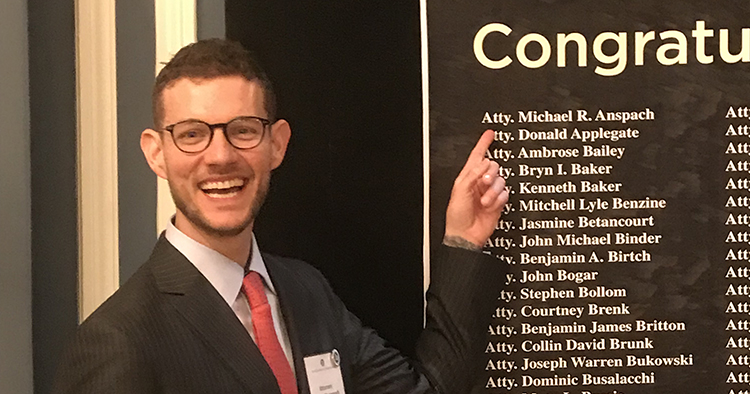 At Marquette University Law School's orientation for new students, Michael Anspach heard about “bar review,” a weekly event that involved meeting at bars for drinks, and he expressed interest in starting a sober club on campus.

“A 2L said: ‘Good luck with that,’ ” says Anspach, a 2018 graduate of the law school who has been sober since February 2011. A bit discouraged, he instead he started the Organization for Student Wellbeing, which was framed as offering ways to deal with stress. Activities included ice skating, apple picking and museum trips.

Looking back, he thinks that there would have been interest in a sober group, noting that the culture of celebrating alcohol in law school doesn’t work for everyone.

“If the habit is to go home every night and have a drink in the evening, maybe then you start drinking in the day. That’s what happened to me. Today, if I was to take a drink or a drug I would get instant relief. The problem is we start chasing that relief,” says Anspach, 32, who got sober as undergraduate at Boston College. Now involved in a 12-step program, he’s been through two rehabilation programs, and it took him eight years to complete his undergraduate philosophy degree, the Milwaukee Journal Sentinel reports.

He discovered yoga early in his sobriety as a way to manage back pain without medication. The practice also cleared his head, and he now does it daily, along with twice-daily meditation sessions. And he developed a special routine for finals week.

“I would stop studying, do an hour of tai chi, make dinner and go to bed early,” says Anspach, who is now studying for the Ohio bar exam. He says that he has some arrests, but no convictions, and is waiting to hear if the Ohio Board of Bar Examiners’ character and fitness finding that permits him to sit for the exam will also make it through the state supreme court. He was recently admitted to practice in Wisconsin, which has diploma privilege for state graduates, and the U.S. District Court for the Eastern District of Wisconsin.

Early on in law school, Anspach told classmates that he didn’t drink but for the most part didn’t go into details about his recovery until a law review banquet in his third year. It included discussion about an upcoming article, written by a DEA administrative law judge and his former clerk, that looked at Congress removing the DEA’s enforcement powers over legal drug manufacturers and distributors as more people were becoming addicted to opioids. The article was quoted in an October 2017 story by the Washington Post and 60 Minutes.

Anspach says that he had a speech prepared to talk about a friend who had recently killed himself from an opioid addiction, and he decided to mention his own path to sobriety as well when he spoke in front of the group.

“At that moment, I felt that it was the right time,” he says.

When asked if he or loved ones feared that the stresses of law school might trigger Anspach to start using again, he responds that his father, Ohio lawyer Robert M. Anspach, has been sober for 13 years. He plans to be a trial lawyer, like his father, and work at his law firm after taking the Ohio bar.

Robert Anspach told the ABA Journal that he stopped drinking “the first time” when his son was 6 weeks old. After he had more sons and his law practice grew, he started drinking again. He got sober again in April 2005, and advises other parents of law students who are sober or active in their addictions of three things.

“Count your blessings every day, set an example with your own life and recognize that your son or daughter always needs to know that he or she is loved unconditionally and is supported by you. But it’s also critical to know that we as parents do not control any of our children’s journeys through this life.”