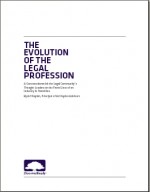 While not all lawyers agree the deep impressions of the economic downturn will last, the majority is preparing for a new paradigm with significant changes to practice—whether it be BigLaw or solo practice—and legal education, says a new study released at ABA Techshow.

Conducted by Ari Kaplan, a lawyer and technology and marketing author, “The Evolution of the Legal Profession: A Conversation with the Legal Community’s Thought Leaders on the Front Lines of an Industry,” is the first in a series that combines insights from a cross-section of the legal industry.

Kaplan, who was the keynote speaker Thursday at Techshow, was commissioned to do the study by DiscoverReady, which sells discovery management services.

Nearly 75 percent agreed that whether beneficial or not, the profession is experiencing a sweeping evolution that will be marked by permanent changes to billing structures, firm organization and value and efficiency expectations from clients. Even more jarring, 85 percent of the participants were aware of instances where corporate clients refused to pay for first-year-associate work done on their cases.

“You just don’t need the bodies and man hours to get answers anymore,” Kaye Scholer partner James Blank is quoted saying in the study. “E-Discovery tools have eliminated the need to have junior associates review boxes of documents, which is why you are seeing thousands [of] junior associates laid off.”

One obstruction to other arrangements is the capital structures of law firms, which aren’t designed to deal with alternative fee demands. Blended and fixed-fee rates, which are popular with firms, seem to be stacked against clients, added Blank. Many firms also struggle with designing creative win-win alternative arrangements, leading to the old fallback of discounts on hourly rates.

Regardless of billing structure, one certainty is the movement of risk toward lawyers.

“Our view is that we need to have ‘skin in the game’ so that we do better economically than if we fail at meeting certain objectives, and we are paid for the results regardless of how much time is spent,” said Patrick Lamb of Valorem Law Group.

While the study questioned the sustainability and value of past business models, some in place for generations, Harvard Law School professor David Wilkins noted a study by the American Bar Foundation and NALP Foundation for Law Career Research and Education that reported more than 70 percent of lawyers were moderately or very satisfied with their career decision.

“Satisfaction is a blunt instrument,” Wilkins said, “but the portrait of widespread misery is wildly exaggerated.”