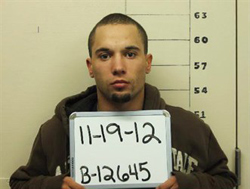 A 22-year-old Idaho man accused in the beating death of a monkey at a Boise zoo has been sentenced to up to seven years in prison, though he may be able to avoid jail time if he completes a treatment program.

Reuters, the Associated Press and the Idaho Statesman have stories on the sentencing of Michael Watkins of Weiser, Idaho, who had pleaded guilty in March to attempted grand theft and misdemeanor animal cruelty in connection with the incident. Police said Watkins broke into Zoo Boise on Nov. 17 after a night of drinking, tried to steal a Patas monkey, and then beat the animal repeatedly after it bit him. The monkey later died from blunt force trauma.

According to the Idaho Statesman, Watkins was placed on retained jurisdiction, in which he may be eligible for release after completing a nine- to 12-month treatment program. If he goes to prison, he would be eligible for parole in two years. He also faces a possible six-month sentence for animal cruelty, though it’s unclear how it would be combined with the felony sentence, the story says.

Watkins’ lawyer had argued his client’s errors in judgment were caused partly by depression and alcohol dependency.