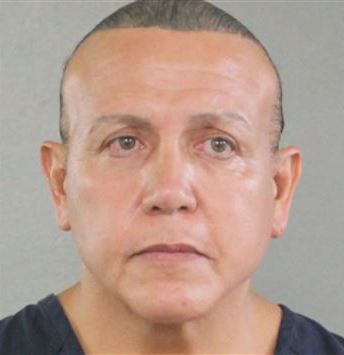 Updated: A Florida man has been charged in connection with more than a dozen pipe bombs sent to former President Barack Obama, Hillary Clinton and several other prominent Democrats.

The suspect is 56-year-old Cesar Sayoc Jr. of Aventura, report NBC News, the New York Times and USA Today. According to the Times, Sayoc is a registered Republican with a criminal history that includes theft, drug and fraud charges, as well as an arrest for an alleged threat to use a bomb.

Thirteen devices have been discovered so far, and there could be more, FBI Director Christopher Wray said during the press conference. Evidence leading to Sayoc include a fingerprint found on a device mailed to Democratic Rep. Maxine Waters of California and DNA from two devices. The DNA is possibly associated with Sayoc, according to the complaint.

The arrest was made in an AutoZone parking lot in Plantation, Florida, after a loud explosion that could have been a flash bang device used by the FBI, CBS4 News reported.

Law enforcement agents seized a white van near the auto parts store that was covered with pro-Trump stickers, according to several publications, including the Miami Herald. The van belongs to Sayoc, the complaint says.

According to the Miami Herald, Sayoc’s Facebook posts are “a mishmash of pro-Trump news stories, racist memes and fake news about Democrats.” Business records identify him as the manager of a catering company.

A Twitter account that appears to be Sayoc’s has several misspellings that are consistent with misspellings on the mailed packages containing the explosives, the complaint says.

On Friday, authorities discovered pipe bombs addressed to Sen. Cory Booker, D-N.J.; Sen. Kamala Harris, D-Calif.; and James Clapper, the former director of national intelligence who has criticized President Donald Trump. Clapper’s package was intercepted at a New York City mail facility, although it was sent to CNN where he is an analyst. Booker’s package was found in Florida.