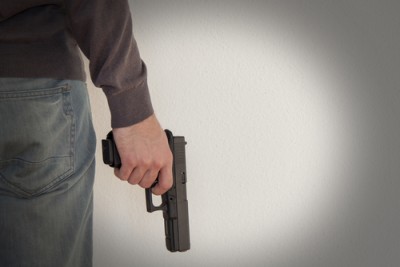 A Louisiana man has been convicted of attempted manslaughter for shooting into the car of a fleeing home invader who allegedly held three people at rifle-point before being disarmed.

Jurors on Thursday convicted 27-year-old Aaron Neames of Walker, the Advocate reports. The defense had argued Neames was protected by the state’s “stand your ground” law.

The Advocate tells the story of the 2015 incident, as alleged by police and prosecutors. Neames wasn’t home when Benjamin Jarreau first entered the home. Jarreau told police he had targeted Neames’ house because he had purchased drugs there before and believed he could find money to repay a drug debt.

While in the home, Jarreau allegedly stole cellphones, fired his gun and shot at Neames’ feet when he arrived. Neames and others in the home were able to take the gun from Jarreau, and Neames allegedly pistol-whipped him in the head.

Jarreau escaped and got in his car. Neames fired at it six times, striking Jarreau in the elbow and arm.

Assistant District Attorney Zach Daniels of Livingston Parish told jurors in closing arguments that Neames fired the gun because he “wanted to take justice into his own hands,” according to the Advocate.

Defense lawyer Ed Atebara argued that Jarreau could have had another gun and he posed a danger to others when Neames fired. “Stand your ground. That’s why we’re here,” he told jurors. “It doesn’t say stand in your house and watch that guy run out the door, let him leave, get in his car go commit another crime.”

Jurors were instructed that reasonable force could be used to prevent a forcible offense against others. Jurors were also told that a person who is in a place he or she has a right to be may stand his ground and meet force with force.