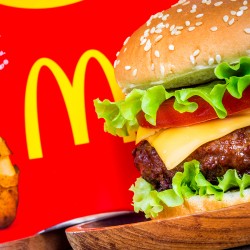 An Alabama man who ordered a double quarter-pounder with cheese last week at a McDonald’s restaurant in Georgia could soon find himself arguing to a local judge that he deserves a break today.

Madison Turner says he was pulled over in Marietta for eating the burger while driving and has the ticket to prove it, reports WSB.

While the state does have a distracted-driving law that is vague enough to be applied in this manner, a seasoned traffic defense lawyer not involved in Turner’s case says he has never seen such a citation before.

“I’ve only seen something like this charge when there’s an accident,” attorney William Head told the station. “There was no accident here so the fact that this man was charged with eating and driving is a first for me.”

He also noted that Turner is far from the only individual who has eaten fast food behind the wheel. “If this was the law, I’d have to hire more attorneys because everybody does it, including me,” Head said.

However, Cobb County Solicitor General Barry Morgan told the Atlanta Journal-Constitution that he will prosecute the case against if he can prove beyond a reasonable doubt that eating the burger affected Turner’s driving. Morgan said that means he he has to prove that Turner was eating the burger, that the burger was distracting Turner and that the distraction caused Turner’s vehicle to be operated unsafely.

Turner has a Feb. 3 court date.

Updated Jan. 23 with information from the Atlanta Journal-Constitution.