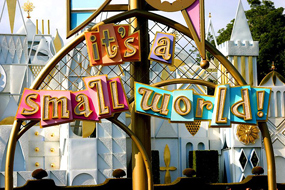 A disabled man trapped on a ride at Disneyland as music blared overhead has won an $8,000 damages award in federal court.

The nightmare for Jose Martinez began the day after Thanksgiving in 2009 when his and his wife’s ride on “It’s a Small World” was coming to an end. The couple and other amusement park visitors were in the “Goodbye Room” when the ride broke down. Other riders were evacuated, but Martinez, who is paralyzed and needs a wheelchair, was reportedly left in the car while “It’s a Small World” music played in a loop.

The Los Angeles Times and San Francisco Chronicle have stories.

David Geffen, who represented Martinez, told the papers that his client suffers from panic attacks and high blood pressure, both of which were aggravated as he sat in the boat. Geffen said rather than call firefighters to evacuate Martinez, park officials waited for the ride to be fixed. Martinez was trapped for about 30 minutes, then treated at a Disneyland first aid station.

Disneyland issued a statement that it believes it provided appropriate assistance and was disappointed the court didn’t fully agree. Martinez was awarded $4,000 for pain and suffering and $4,000 for other disability access violations, according to the LA Times.