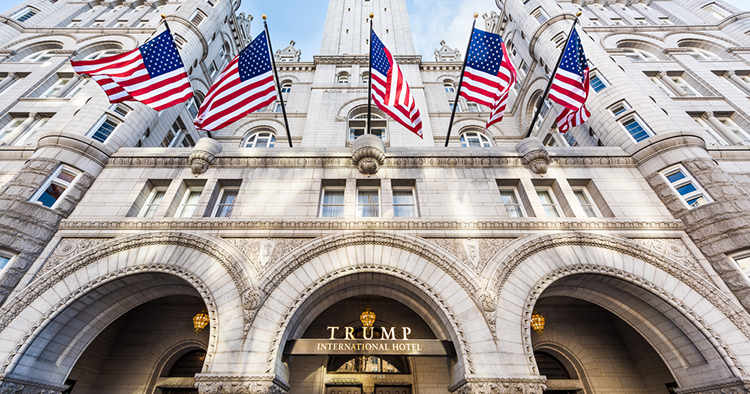 Corrected: Congress, not the courts, should decide whether President Donald Trump is violating the Constitution by failing to divest his business holdings while acting as president, a federal district judge ruled (PDF) Thursday.

Bloomberg News reported that Judge George Daniels of the Southern District of New York dismissed the lawsuit brought by Citizens for Responsibility and Ethics in Washington and a restaurant industry group. It’s the first-ever ruling on when a president’s business dealings might violate the Constitution’s emoluments clause, which forbids public officeholders from taking payments from other countries without congressional consent.

The plaintiffs had argued that Trump continues to receive business income from foreign governments, particularly from the hotel, skyscrapers and restaurants he owns in New York City and Washington, D.C. They alleged that this could create corrupt entanglements between Trump’s business interests and federal business, and cited several instances where that could be the case.

But Daniels noted that the foreign emoluments clause says “no person holding any office of profit or trust under them, shall, without the consent of the Congress, accept any present, emolument, office, or title, of any kind whatever, from any king, prince or foreign state.” Because the Constitution expressly gives Congress the power to consent, he said, courts avoid interfering, under the political question doctrine, unless and until Congress asserts that power.

“Congress is not a potted plant,” the judge observed in a footnote. “It is a co-equal branch of the federal government with the power to act as a body in response to defendant’s alleged foreign emoluments clause violations, if it chooses to do so.”

Daniels also ruled that the plaintiffs lacked standing. CREW had alleged that it had standing because the president’s allegedly unethical behavior had forced it to divert resources to this lawsuit, but Daniels found that this is not enough to show an injury in fact.

As to the hospitality industry plaintiffs—which include Restaurant Opportunities Centers Unlimited and two individuals who work in hospitality—they had argued that competition from the President of the United States put them at an unfair disadvantage. Foreign governments and domestic government agencies may choose to patronize Trump hotels and restaurants to curry favor with Trump, they had alleged. But the court found this too speculative.

“It is wholly speculative whether the Hospitality Plaintiffs’ loss of business is fairly traceable to Defendant’s “incentives” or instead results from government officials’ independent desire to patronize defendants’ businesses,” the court wrote. “It is only natural that interest in his properties has generally increased since he became president.”

Interest in the case has focused on its foreign emoluments clause aspect, Bloomberg reported. Former acting solicitor general Ian Gershengorn told Bloomberg this case was “one for the history books.” Law professor Seth Barrett Tillman of Ireland’s Maynooth University submitted an amicus brief arguing that the emoluments clause doesn’t apply to the president of the United States, igniting an argument among legal historians, the New York Times reported in September.

Bloomberg notes that at least two other lawsuits accusing Trump of violating the foreign emoluments clause are pending, in federal district courts in Washington, D.C. and Maryland.