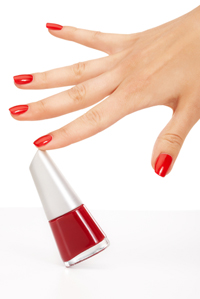 The Wall Street Journal’s Metropolis blog explains the appeal of a manicure meeting. “The nail salon provides benefits that the conference room lacks,” the story says. “With fingers frozen under a fresh layer of lacquer, participants can’t grab an iPhone or BlackBerry to check email or sneak in some Words With Friends. They simply have to listen to each other.” The story is titled “Idea to File Away: Manicure Meetings.”

Adair Goodyear, co-owner of the Tenoverten nail salon in TriBeCa, said many of her business clients are in publishing and advertising, but she also sees City Hall workers and Goldman Sachs executives. “We get quite a few men too,” she told the Wall Street Journal. “We don’t get all-male groups, but if there is a guy on the team, he typically comes too and feels comfortable getting a mani/pedi.”