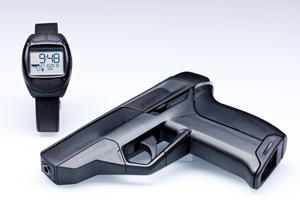 Updated: “Smart guns” that can only be fired by an authorized user used to be the exclusive purview of James Bond movies and sci-fi novels.

Smart guns are a real thing now, and German-based Armatix has unveiled the Armatix iP1, a gun that requires users to wear a radio-frequency emitting watch that must be within a certain distance of the gun for it to fire. The challenge for Armatix has been to find a gun dealer in the U.S. that’s willing to sell them. That’s because the smart gun has run into vociferous opposition from National Rifle Association members and other gun rights groups who worry that gun manufacturers will be forced to adopt this technology.

According to the Washington Post, a gun dealer in Rockville, Maryland, had decided to buck the NRA and others and to sell the Armatix iP1. Previously, the Oak Tree Gun Club near Los Angeles was the only place you could buy the smart gun. However, after run-ins with gun rights activists, the club pulled the weapon off its shelves and abandoned plans to sell it.

Andy Raymond, the co-owner of Engage Armament, told the Post that selling the smart gun was a “really tough decision” after what happened to Oak Tree Gun Club. However, Raymond said that Maryland’s gun laws are so strict that he has to offer the Armatix iP1 in order to expand the market. Raymond also has little sympathy for the groups protesting against the smart gun.

“To me that is so fricking hypocritical,” Raymond said to the Post. “That’s the antithesis of everything that we pro-gun, pro-Second Amendment people should be. You are not supposed to say a gun should be prohibited. Then you are being no different than the anti-gun people who say an AR-15 should be prohibited.”

But the day after the Post reported that Engage Armament would sell the smart gun, they ran a new article, saying that after a full day of death threats and protest, Raymond announced that he had withdrawn those plans.

In a video posted to the business’s Facebook page on Thursday night, Raymond apologized and said he would step down from the business if necessary.

But he decried the hostile responses he’d received since the original Post story ran. “You call me and email me and threaten my life? You come at me, my girlfriend, or my goddamned DOG I will put one in your dome. I promise you,” he wrote in the post, which has since been removed from the Facebook page.

The NRA’s position is that they are not against technological innovation. What the organization is concerned about is that the government will mandate smart gun technology on all guns. “[The] NRA recognizes that the ‘smart guns’ issue clearly has the potential to mesh with the anti-gunner’s agenda, opening the door to a ban on all guns that do not possess the government-required technology,” it said in a November press release.

The Post states that gun-control groups believe smart guns like the Armatix iP1 could curb gun violence, suicides and accidental shootings. However, not all gun control groups are on board. The Violence Policy Center fears that smart guns will lead to an increase in gun ownership because people will think they are more safe than regular guns.

The day before he announced that he would not sell the guns, Raymond had said he hoped that his rollout of the Armatix would go better than Oak Tree Gun Club’s. “If the same reaction happens here, we’ll be out of business,” he said.