McElhaney: Falling in Love with Your Case Means You Won’t See Its Shortcomings 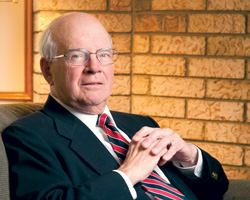 Nick Wheeler stopped Angus and me outside the Donut Hole, across the street from the Court of Common Pleas.

“I’m trapped in a bad case that keeps getting worse, and I want out,” said Nick. “I agreed to help Mike and Ellen Pollock try a patent infringement suit. It may be worth as much as $150 million or $200 million—it’s a contingent fee case—but the way the Pollocks are approaching it, they’ll be lucky to get anything.”

“Doesn’t sound like the Pollock twins to me,” said Angus. “They’re supposed to be good lawyers.”

“That’s what I thought when I agreed to work with them,” said Nick. “But they’re patent lawyers, not trial lawyers. They’ve never had a big damages case before, and they want me to help them out with the entire trial.”

“What are they doing that’s hurting the case?”

“All sorts of things,” said Nick. “Big and little.

“For example, I’ve explained again and again that the most important key to getting big damages is proving big fault. There is a lot of evidence that the defendant deliberately stole their client’s idea and then created an elaborate cover-up to try to hide what it did.

“But Mike and Ellen are ignoring all that. They say the chronology of events establishes everything they need. And it may, for the purpose of getting past a motion for a directed verdict. But you don’t win a lawsuit by putting on the most minimal case the law requires. The Pollocks don’t seem to appreciate the persuasive power of showing their opponent’s skullduggery. There’s a great story in this case that they’re just throwing away.”

“Then there’s the problem of how to meet the defendant’s arguments,” said Nick. “They don’t see the danger lurking in the other side of the case. Whatever the problem, they always think the best answer is in some little bit of circumstantial evidence or maybe just a superficial quip—as if a trial were a contest of verbal agility, like a high school debate, instead of society’s moral arena where right grapples with wrong.”

I liked that, so I wrote it down. Nick continued.

“Next is the way they look at their client. They can’t conceive that anyone would disbelieve a thing their client says. They think he’s the most credible witness they’ve ever seen. But the truth is, the defendant’s CEO is pleasant, intelligent and articulate. Unless you listen very critically to what she says, she makes a better impression than the plaintiff does.

“The problem is, Mike and Ellen so thoroughly believe in their case that they’re unable to step back for an objective look at their weaknesses or the other side’s strengths. Trial is six weeks away, and they’re not remotely ready to do what’s necessary to win.”

Click here to read the rest of “Don’t Be Seduced” from the July issue of the ABA Journal.