Meet She-Hulk, heroine of new comic book series who can bench-press a bus and runs her own law firm

Some might conceivably take issue with her scanty attire. But the fictional heroine of a new Marvel Comics series that debuts Wednesday is surely worthy of admiration both for her ability to bench-press a bus and the fact that she recovered from being fired from her job by establishing her own law firm in Brooklyn, N.Y.

Known as Jennifer Walters in ordinary life, She-Hulk works her network (she is the cousin of Hulk) to develop legal business from superhero connections with the Fantastic Four and the Avengers, USA Today reports. This is Marvel’s newest She-Hulk series, but the character made her first appearance in 1980. 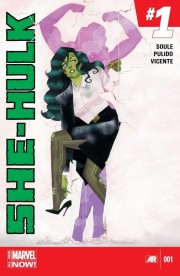 “She’s not grim or embittered about the fact that she’s not like everyone else,” creator Charles Soule, an attorney, says of the star of his series, who is also something of a green giant and seeks to achieve work-life balance. “She celebrates it, and that makes a person strong whether they happen to be a 7-foot-tall gal who can bench-press a bus or not.”

In a lengthy interview with Comic Book Resources, Soule reveals some of the plot developments he expects to explore.

“I’m structuring the first 12 issues of She-Hulk as something like a TV season, with each issue working as an ‘episode,’ and then the whole season having a larger overarching story,” he explains. “That bigger story revolves around a particular case file that Jen can’t quite figure out. It names her and some other members of the Marvel U as defendants, but she can’t remember anything about it, and it seems to have been erased from all records. It’s pretty weird.”

ABAJournal.com: “If You Could Create a Lawyer Superhero, What Would Be His / Her Name? Powers?”