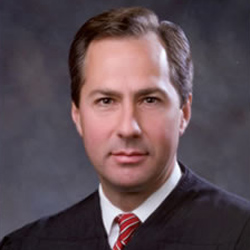 President Trump intends to announce his Supreme Court nominee next week amid speculation and differing media reports about the top contenders.

Two publications have named Judge Neil Gorsuch of the Denver-based 10th U.S. Circuit Court of Appeals as a top contender. But at least two other stories, published by USA Today and Politico, say there are three top contenders.

One of the three, Judge William Pryor of the Atlanta-based 11th U.S. Circuit Court of Appeals, was previously thought to be at or near the top of the list. But his star is fading, Politico reports. The publication names the top two as Gorsuch and Judge Thomas Hardiman of the Philadelphia-based 3rd U.S. Circuit Court of Appeals, a 51-year-old judge labeled a “dark horse” finalist by USA Today.

Trump’s sister, Judge Maryanne Trump Barry, is also a 3rd Circuit judge. USA Today says Hardiman’s law-and-order rulings put him in the same mold as Justice Samuel A. Alito Jr., who served on the same court. SCOTUSblog doesn’t disagree, but the blog also sees parallels in background with Justice Sonia Sotomayor, who grew up in a Bronx housing project and felt like an outsider when she attended Princeton University.

Hardiman was the first person in his family to attend college, and he helped pay for his Georgetown University law degree by driving a taxi.

On the bench, SCOTUSblog says, “Hardiman has weighed in on a variety of hot-button topics important to Republicans, and his votes in these cases have consistently been conservative.” The blog goes on to examine specific rulings.

In free speech cases, Hardiman sided with an anti-abortion protester and a man who challenged a law that made it a crime to depict animal cruelty in videos (a decision affirmed by the U.S. Supreme Court, with a dissent by Alito). But Hardiman was less sympathetic to other free speech claims. In one case, he sided with a school district that barred students from wearing breast-cancer awareness bracelets with the message “I [heart] boobies.”

In religion cases, Hardiman wrote a dissent siding with a mother and her son who weren’t allowed to read from the Bible during a kindergarten show-and-tell. In religious rights cases filed by inmates, however, Hardiman generally ruled for prison officials.

In death penalty cases, Hardiman generally voted for the state, and he joined an opinion upholding Delaware’s lethal injection protocol.

In a dissent in a gun rights case, Hardiman asserted that Second Amendment protections extend beyond the home to protect a gun owner who wanted to carry a handgun in public without the need to show a “justifiable need,” as required by New Jersey law. In other cases, however, he has concluded that the Second Amendment did not protect dangerous persons likely to use firearms for illicit purposes.

SCOTUSblog says Hardiman “has been harder to pigeonhole” in some cases. One of them is a decision he wrote for the 3rd Circuit that allowed a gender-stereotyping claim by a gay man who didn’t conform to his employer’s vision of how a man should look, speak and act.