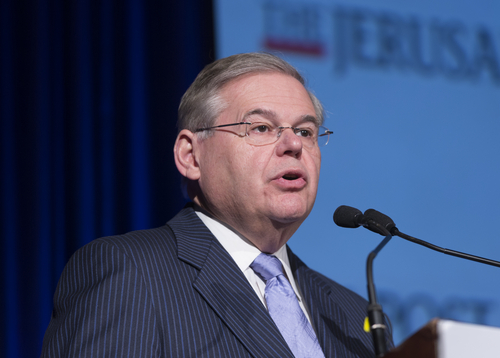 U.S. District Judge William Walls told a lawyer for U.S. Sen. Robert Menendez to “shut up” in court Wednesday as the two clashed over the judge’s rejection of a defense request in the New Jersey Democrat’s corruption trial.

The lawyer, Raymond Brown, had criticized Walls for language in an opinion on Friday that turned down a request to recess the trial for critical Senate votes, Politico reports. It was unclear what language Brown disliked, but it may have been a sentence in which Walls said he suspected the defense hoped the recesses would impress the jurors with Menendez’s importance, Politico explains.

Brown told Walls he believed the court had “disparaged the defense,” according to the article. Brown and Walls began talking over each other, and Walls told Brown, “Shut up for a moment if you don’t mind.”

Walls said he didn’t disparage Brown and his comment was intended to underscore how the defense request lacked merit. “Now I feel quasi-insulted,” Walls said.

Walls refused to strike the language that offended Brown from the opinion.

Walls also criticized prosecutors for filing a motion on jury instructions, the Associated Press reports. Lawyer Abbe Lowell said the motion was filed in accord with Walls’ order from last December. “Fine. Bill me,” Walls said.

Defense lawyers said Menendez had merely vacationed with Melgen and many political donations went to committees that Menendez didn’t control.