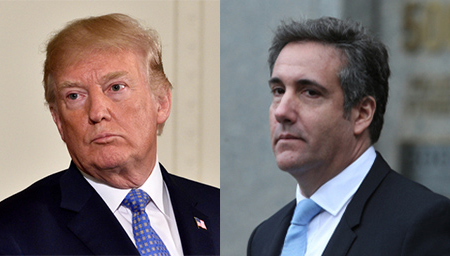 Cohen, who was disbarred on Tuesday, said he was ashamed of the things he did for Trump and his role in concealing Trump’s “illicit acts.”

“I am ashamed because I know what Mr. Trump is,” Cohen says in the prepared testimony. “He is a racist. He is a con man. He is a cheat.”

Cohen said he was in Trump’s office when Trump adviser Roger Stone, who could be heard on a speakerphone, told of discussions with WikiLeaks about the upcoming publication of the emails.

Trump responded by saying something to the effect of “Wouldn’t that be great,” Cohen said.

Politico, the Associated Press and the New York Times are among the publications that obtained an advance copy of the testimony prepared for the House Committee on Oversight and Reform. The Washington Post and CNN also have coverage.

Cohen pleaded guilty in November to lying to Congress for falsely saying plans to build a Trump Tower in Moscow had ended in January 2016.

In his testimony, Cohen says Trump didn’t directly tell him to lie. But Trump would tell Cohen there is no business in Russia and would tell the American public the same thing, even as Cohen was actively negotiating for Trump, Cohen said. “In his way, he was telling me to lie,” Cohen said.

Cohen said he was providing the committee with a check that Trump wrote from his personal bank account after he became president that partly reimbursed Cohen for his payment to Daniels. Additional reimbursements followed, Cohen said.

Cohen also said he was providing the committee with copies of letters he wrote for Trump that threatened his high school, colleges and the College Board not to release his grades or SAT scores.

According to Cohen, Trump ran for office “to market himself and to build his wealth and power.” Trump had described the presidential campaign as the “greatest infomercial in political history” and never expected to win, Cohen says.

During questioning on Wednesday, Cohen “suggested ominously” that federal prosecutors are investigating a case that involves the president, according to a Washington Post account.

The suggestion was made in response to a question about whether Cohen was aware of any other wrongdoing or illegal act that he hadn’t yet discussed. “Yes,” Cohen replied, “and again, those are part of the investigation that is currently being looked at by the Southern District of New York.”

Cohen was disbarred in New York on Tuesday as a result of his guilty plea for lying to Congress, report the New York Law Journal and the Legal Profession Blog. The disbarment order says the federal felony would constitute the state law felony of filing a false instrument.

Trump noted the disbarment in a tweet Wednesday at about 1 a.m. “He is lying in order to reduce his prison time,” Trump wrote.

Michael Cohen was one of many lawyers who represented me (unfortunately). He had other clients also. He was just disbarred by the State Supreme Court for lying & fraud. He did bad things unrelated to Trump. He is lying in order to reduce his prison time. Using Crooked’s lawyer!

Updated at 5:10 p.m. to include Cohen’s testimony on a pending federal probe in New York.