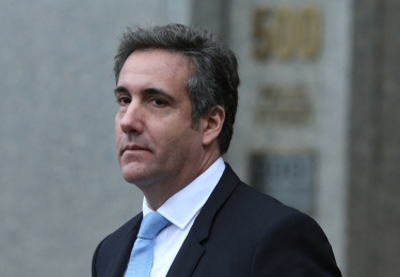 President Donald Trump’s former lawyer, Michael Cohen, told a Manhattan federal judge on Wednesday that he has been “living in a personal and mental incarceration” since the day he began working for Trump.

Cohen, 52, said his weakness was “a blind loyalty to Donald Trump,” but he had moved forward. “Today is the day I am getting my freedom back,” he said. The New York Times, the Washington Post, the National Law Journal and Politico have coverage.

Cohen spoke before U.S. District Judge William Pauley III sentenced him to three years in prison for bank and tax fraud, and campaign finance violations. Pauley also sentenced Cohen to two months in prison for lying to Congress about plans to build a Trump Tower in Moscow, but the sentence will be served at the same time as the other.

Cohen will be required to forfeit $500,000 and make restitution of nearly $1.4 million, according to the National Law Journal. He’s also being fined $50,000 in each of the two cases, the NLJ says.

Manhattan prosecutors had filed the charges that led to the three-year sentence, while special counsel Robert Mueller’s office filed the other case.

Pauley acknowledged that Cohen had assisted the special counsel’s office but said his action did not “wipe the slate clean.” Pauley said Cohen had committed a “smorgasbord” of crimes that were motivated by “personal greed and ambition.”

“As a lawyer, Mr. Cohen should have known better,” Pauley said.