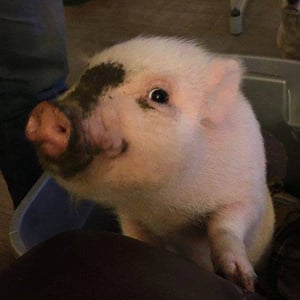 A Michigan lawyer has ended his write-in campaign to elect his pet pig Giggles as mayor of Flint.

Michael Ewing had launched the “Giggles the Pig for Flint Mayor” campaign on Facebook after learning that a mistake by the city clerk’s office threatened to keep four legitimate candidates’ names off the ballot.

He called off the campaign after Michigan Gov. Rick Snyder signed a law fixing the mistake and allowing the mayoral election to proceed, the Associated Press and Michigan Radio report. 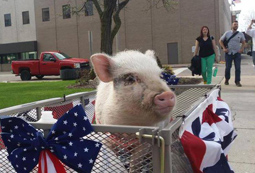 Giggles on the campaign trail in May. Photo from Facebook.

Ewing had said he started the campaign to draw attention to the race, help educate voters and encourage residents to demand more of their elected officials. Earlier articles by the Detroit Free Press and the Huffington Post provide more info on his initial decision to enter Giggles in the mayoral race.

“Though the Giggles campaign was short lived, I hope we were successful in using a little creativity to raise awareness about the election,” he wrote in a overnight post on the page.

He also responded to the oft-asked question of who Giggles planned to vote for.

“Well, she’s not voting for anyone because she’s a pig–and that’s really the only good excuse for not voting in an election that is this important,” he wrote.

Sadly, we must announce that Giggles is withdrawing from the Flint mayoral race. The folks in the state capitol worked…

Posted by Giggles the Pig for Flint Mayor on Tuesday, June 9, 2015