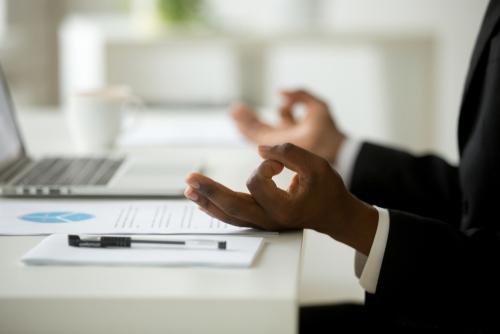 First-year law students at the University of Missouri who volunteered for mindfulness training saw improvements in stress, well-being and mindful awareness, according to a study chronicled in a law review article.

There was no statistically significant difference in grades between the mindfulness volunteers and a control group, however, according to the article, titled “Can Mindfulness Help Law Students with Stress, Focus, and Well-being? An Empirical Study of 1Ls at a Midwestern Law School,” which is slated for publication in the Southwestern Law Review.

Mindfulness is a form of meditation, the article explains. Practitioners are instructed to focus on their breath. They are told that when their mind wanders, they should let go of the thought or emotion that distracted them, and then bring their attention back to breathing.

Forty-seven participating law students took the mindfulness training in the eight weeks leading up to final exams during the 2013 and 2014 academic years. Thirty-four volunteered the first year, and 13 volunteered the second year. Researchers think fewer people may have participated the second year because some faculty members and administrators told students that participation “was not worth their valuable first-year time,” according to the article.

But the study suggests that advice may have been misguided given the benefits of the training.

Students took self-reporting surveys that gauged any improvement. At the beginning, the students taking the training appeared to be more stressed, less focused and unhappier than the control group, suggesting that they volunteered because they needed help with stress.

By the end of the semester, the scores on these measures for the mindfulness group had largely caught up with the control group, whose scores showed no statistically significant change.

There also were some anecdotal reports of benefits from the training. One student with a history of test anxiety reported that she now felt confident before exams because she knew that fear was “just another thought that I can let go of,” according to the article. She finished No. 3 in her class after the first semester.

Another student reported that she had a long-time sleep disorder, but she was “sleeping seven or eight hours a night since beginning the study,” according to the article.

The authors noted some limitations to the survey. More participants generating more data would be better. Randomly selected participants, rather than volunteers, would eliminate self-selection bias.

Also, students answering the surveys may be answering questions in a way they thought to be pleasing the researchers, even though researchers had made clear that they wanted honest evaluations. Reuben and Sheldon said they tried to incorporate saliva cortisol draws to measure stress, “but that proved unacceptable to this population of subjects,” according to the article.