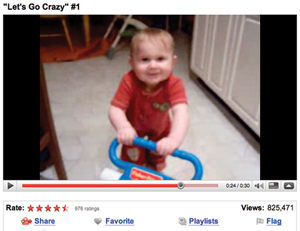 A mom who whose home video of her toddler dancing to Prince’s “Let’s Go Crazy” got her in trouble with Universal Music Group has won a partial summary judgment against the music label.

Four months after the video went up, the music label ordered YouTube to take the video down, saying it infringed on the label’s copyrights pursuant to the Digital Millennium Copyright Act. YouTube took it down. But Stephanie Lenz then sued Universal, saying the 30-second video was fair use of the song—and won. In 2008, U.S. District Judge Jeremy Fogel of the Northern Dis­trict of California ruled that if a copyright owner sends a takedown notice without first making a good-faith evaulation of whether the work is covered by fair use, the owner could be liable for damages.

Universal fired back that Lenz pursued damages in bad faith, since she knowingly used the copyrighted song in her video, knew by putting it on YouTube that it could be viewed by a large audience, and did not truly suffer damages during the time her video was taken down from YouTube.

But Fogel shot those arguments down late Thursday and granted Lenz’ motion for partial summary judgment in a ruling (PDF provided by the Recorder) that defined some standards for damages and fee provisions in cases like these, the Recorder reported.

Fogel wrote that a plaintiff in a 17 USC § 512(f) case could recover damages for costs and fees incurred prior to litigation, but not necessarily costs and fees incurred afterward. “The court concludes that Congress did not intend to allow plaintiffs to establish the damage element under section 512 simply by hiring an attorney and filing suit,” Fogel wrote, and “recovery of any other costs and fees is governed by section 505.” Section 505 states that the court can award reasonable attorney fees to a prevailing party at its discretion.

So the Electronic Frontier Foundation, which incurred more than $400,000 in litigation fees, the Recorder reported, would have to apply for a fee award under section 505.

Corynne McSherry, a senior EFF staff attorney who is representing Lenz, told the Recorder that the ruling is a victory. “I think what’s important here is that someone who’s had their speech chilled can move forward and bring a lawsuit under 512(f),” McSherry told the paper.

But others say that provisions of the ruling may remove others’ inclination to file suit.

“While the earlier Lenz decision encouraged users to seek sanctions for wrongful takedown notices … the narrow scope of damages and attorneys fees potentially recoverable for such claims under Lenz will likely scale back the volume and frequency of such claims,” Ian Ballon, who practices Internet law at Greenberg Traurig, wrote in an e-mail to the Recorder.

Ben Sheffner at Copyrights and Campaigns thinks this ruling means that Lenz and the Electronic Frontier Foundation will only be able to recover a very small amount without pursuing a fee award under section 505. “The EFF attorneys spent 30 seconds watching the video, and I’m sure it took them only about 5 more to reach their conclusion that this was a fair use,” Sheffner wrote. “Drafting and sending a counternotice should have taken them only about 15 minutes. Realistically, the fees unrelated to the actual litigation (which the court held are recoverable even though EFF works pro bono) are probably well under $1,000.”